Self-healing is a biological principle

The human body has the extraordinary ability to heal and regenerate itself. With every breath, our body is busy keeping all the processes taking place in it in a dynamic balance. In most cases, however, certain illnesses require additional treatment. Therapy – as free of side effects and non-invasive as possible – is a fundamental goal in medical research worldwide. Study results over the last decades have proven that extracorporeal shockwave therapy (ESWT) can fulfil these criteria for many clinical conditions.

High-energy waves, which travel faster than the speed of sound, are bundled and hit different depths in the body, triggering a cascade of cellular and molecular events called mechanotransduction. Unique in medical technology, the mechanical energy of the shockwaves is converted into biochemical signals in the diseased target tissue. Thus, ESWT can repair pathologically altered tissue, achieve regeneration and lead to complete self-healing.

Extracorporeal shockwaves should be understood as a mechanical stressor capable of inducing biochemical changes in living tissues, known as mechanotransduction. Mechanisms of action and effects of ESWT described in the literature: 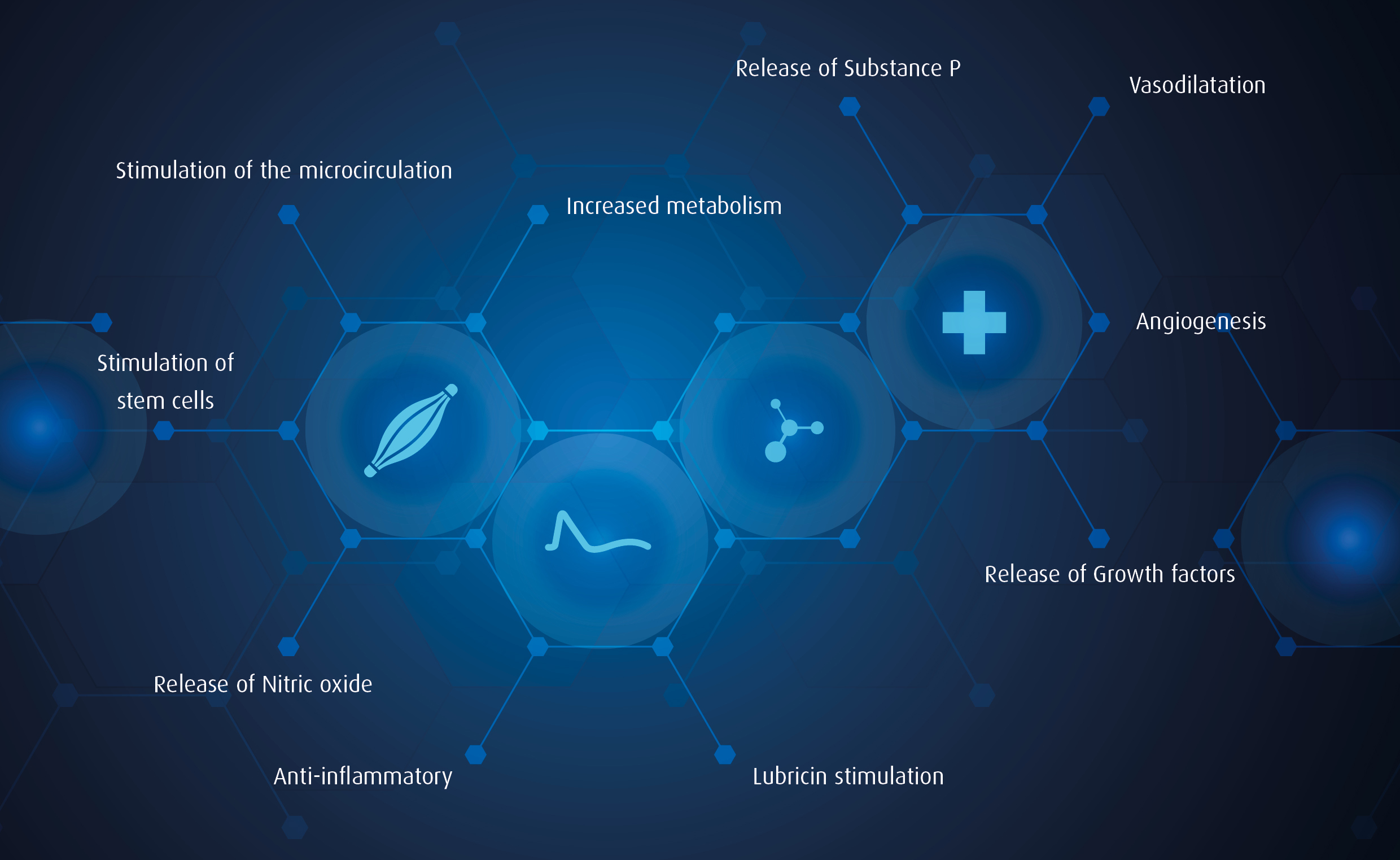 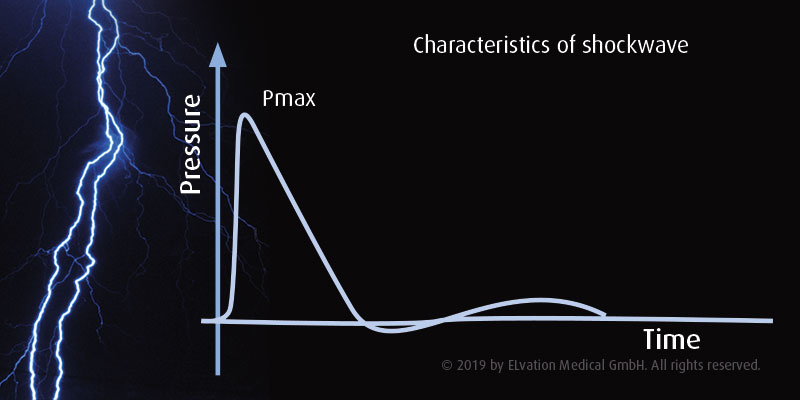 Physical principles of the acoustic shockwave

Characteristic of a shockwave is a powerful, spatially propagating acoustic impulse with a very short rise time lasting a few nanoseconds. This is followed in only a few microseconds by a brief negative pressure, which then levels off to normal pressure.

Uncomparably variable – The right therapy source for every requirement.

The increasing number of shockwave indications demands that treatment focal zones are capable of the appropriate penetration depth, strength, shape and volume. Elvation Medical and Richard Wolf continue to lead the industry in the development of technology that provides targeted focal treatment zones for a wide range of indications. Our goal is to fulfil the requirements of promising, optimally adapted treatments.

The piezoelectric shockwave: Superior and direct-focused

Piezoceramic elements arranged on a concave support are briefly expanded simultaneously in the micrometre range by a high-voltage pulse and generate a pressure pulse. The piezo elements are precisely aligned with the treatment focus. Steepening at the treatment focus results in shockwave formation. The piezo shockwave is the only shockwave design that uses “direct focusing”. Unlike other designs that require inefficient, unprecise soundwave redirecting piezo technology creates a precise, well-defined focus zone. It is quiet, painless and allows for varied, controlled intensity dosing. Additionally, piezo technology provides exceptional longevity when compared to other technology.

The F10G10 therapy source generates an elongated focal zone and thus takes special account of the anatomy of the pelvic floor. It achieves a maximum penetration depth of 100 mm in the centre of the focus. This makes it particularly suitable for treatment at different depths – without having to change the forward section.

New and unique in the world, Richard Wolf and ELvation have developed a line-shaped focusing shockwave. The goal was to enable a significantly more homogeneous, faster and more effective application of the focused shockwave.

Handy and powerful – for the treatment of Peyronie’s disease

The F7G3 therapy source is a small and handy therapy source. Its strong performance data make it ideal for the treatment of Peyronie’s disease.

New and unique in the world, Richard Wolf and ELvation have developed a line-shaped focusing shockwave. The goal was to enable a significantly more homogeneous, faster and more effective application of the focused shockwave.

Handy and powerful – for the treatment of Peyronie’s disease

The F7G3 therapy source is a small and handy therapy source. Its strong performance data make it ideal for the treatment of Peyronie’s disease. 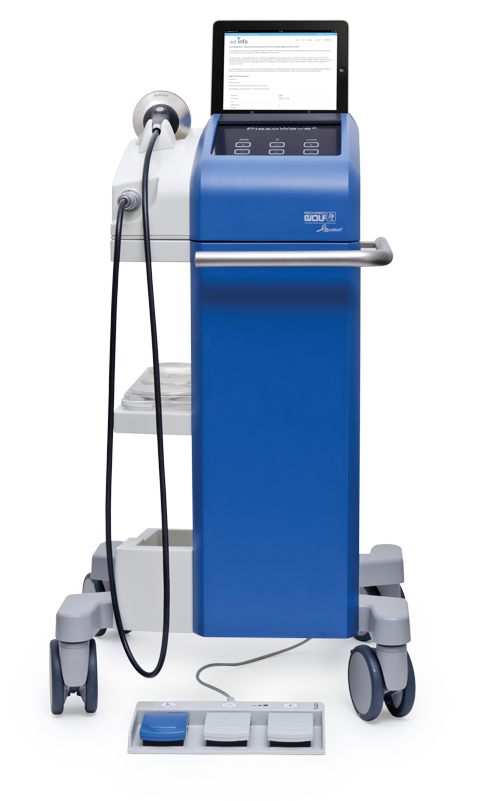 The piezoelectric shockwave principle allows a unique variability of the shockwave modulation. Unique in the world, it is possible to choose between the classic focused shock wave, the line-focused shockwave and the planar pressure wave. The right modulation for every indication. The PiezoWave² is characterized by a very simple operating structure. The therapy source recognition by means of Plug & Play ensures that your PiezoWave² provides the corresponding power spectrum as soon as the therapy source is plugged in. The individually desired setting is reached with just a few keystrokes. You are supported by our ESWT app for your iPad. With this new way of user support, we ensure that you will continue to receive the latest setting experiences and application recommendations in the future. Online and fast.

Are you a doctor / user and would like to learn more about the PiezoWave²?

A project of ELvation Medical GmbH.

In addition, by using this website you agree that you have read and understood the following disclaimer: "I am aware that this website contains basic experience and information regarding medical devices as a contribution to personal opinion.
It does not replace the advice of my attending physician."

This website uses cookies to improve your experience while you navigate through the website. Out of these, the cookies that are categorized as necessary are stored on your browser as they are essential for the working of basic functionalities of the website. We also use third-party cookies that help us analyze and understand how you use this website. These cookies will be stored in your browser only with your consent. You also have the option to opt-out of these cookies. But opting out of some of these cookies may affect your browsing experience.
SAVE & ACCEPT